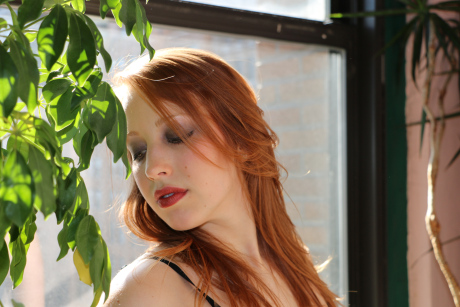 Amid the snow and ice of the last day of February, a day brimming of inspired artistry unfolded with ACD that melted the frozen feelings of a long winter. Inspired by my niece, Alana Kirzner, a stunning dancer with a fierce energy and supermodel look, I loosely wrote a script for a new film short. Amelia Golden, filmmaker and collaborator with ACD, joined our project for a day of artistic discovery in NYC, beginning at Ripley Grier Studios in NYC, and ending at the Botanical Gardens in the Bronx.

Alana brought it all to the table with her technical finesse and dramatic edge, portraying a character that oddly came to life once the costume pieces were donned. A spirit came alive; however, when this black, velvet dress and shrug, hung on a pipe in my basement to air out and de-wrinkle after I brought it home form the thrift store. It was then, in the dark shadows, that it swayed side to side, ever so gently, that I could see a mysterious woman from the turn-of-the century living in it, or could it also be the spirit of Madeline from the famous children’s book? No matter the origin, Alana awakened her own spirit to flesh out the character she became that day, both indoor in the studio, and outdoor at the Botanical Gardens, where we choreographed a frosty frenzy of quick-study exhibitions on the snowy, wooded paths. We ended at the gorgeous Haupt Conservatory at the Chandelier Orchid exhibit, where we warmed it up for a supreme finale among the fertile plant-life and blossoming flowers… we were loose, fluid and filled with a taste of Spring in the air! Stay tuned for our new film–coming soon!!