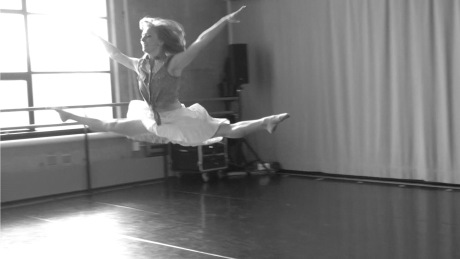 The most inspiring moments at the Baryshnikov Arts Center usually happen by mistake.

Take that day back in June when I choreographed a new solo, Dust Devil, on Ryan Schmidt. Filmmaker, Amelia Golden, was on deck as we pranced around the building grabbing ad hoc shots here and there, as part of our rehearsal process. I accidentally ran into a European dance company that was doing a residency at BAC, and had constructed an enormous, wooden structure that served as an installation to their dance project. They were in the room next to us, and to my surprise, were agreeable to let us in after their rehearsal to shoot some random shots around the space. Well, these random shots turned out to be the inspiration to Playing House, our new short-film performed by Ryan Schmidt.

These rare moments when space, time and energy come together to create an idea, have become my passion. Seeing what Amelia captures through her lens has always fascinated me. Curiously, I watched as she revealed the footage from that day. Hmmm… Ryan’s engagement ring appeared in a close-up, along with this raw structure that resembled a new house being built. Could the synchronicity of Ryan’s new engagement, have something to do with building a new house and future? You’ll have to see for yourself. I always loved playing house as a kid, and I hope with your child-like vision, you’ll imagine something that resembles that for yourself.