In the creation of this piece, I was thinking of a quote for the program notes, so I came up with one of my own: “Lazily we loll, curious beneath our non-chalance…” You can sense what this might conjure.

I love Muriel Anderson’s work… she’s a phenomenal muscian. I’ve used one of her pieces, “Waiting For Matthew,” in a duet I choreographed last year, called “I Will Show You An Ocean.” Check out her website, folks… 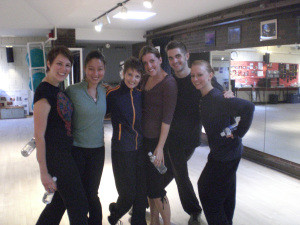 Adams Company Dance was invited to to do a one-day residency at Greenwich Academy, in Greenwich, CT, this week.  They have a state-of-the-art theater and a dance program for their students.  Wow!  What a nice place!  The dancers performed, “At Ease,” and  “Undisclosed Recipients,” a solo tribute to MLK, Jr., danced by Annie Church.  After the performance, I led 40 students in a workshop based on trust 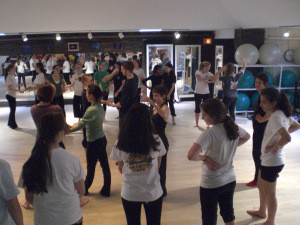 exercises and partnering. It was cool to see the kids try new things like falling backward, and counterbalancing their weight.  We also formed a gauntlet and had one dancer at a time pass through while lying on their back. Fun stuff! My dancers did a great job with the whole day. Afterward, they had a few beers at Thataway Cafe and jumped on the train back to NYC. 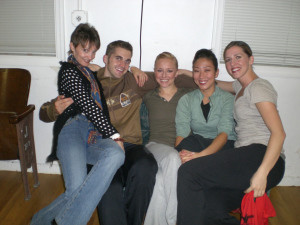 Last week ACD performed in the CT Meets NY Dance Fest in Norwalk, CT, at the Crystal Theater. For their premiere, they did a really nice job. As they were the last piece, they waited backstage for long hours after the tech, where Don, my husband, and Annie Church, gave Jin Shin Jyutsu sessions to the dancers in the concert.  My task was to clean the stage from the slippery lotion that got on the floor from someone’s feet! Ok, it was on my hands and knees, but my sister showed up and helped out, which made it all the nicer!

Another notable dance tidbit… I am making a documentary!  On a hot day this past June, I gathered together eight dancers to work for 3 hours on video documentary called, “Except at Night…” : The Making of a Dance. I had previously worked with five of the dancers, but three were new. I was lucky to have had world-class dancers, all of whom were dedicated to the process and who went along with my wacky sensibility. Who in their right mind would set a task to create a ten minute 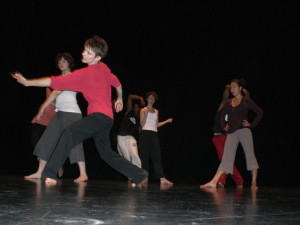 piece in three hours?  I work better under pressure and quite frankly, I was ready for a challenge. So, with all schedules a “go, ” we communed for three hours with an amazing videographer & artist, Ben Moss, at the helm as our documentarian. We had worked together, so I felt comfortable and knew we were in good hands.  Husband, Don, was my line assistant, and the Greenwich Academy theater was where we staged the event.  On June 26th, eight dancers got off the train in Greenwich from NYC, and away we went on this unknown journey.  I say, unknown, because I had no real “choreography,” per se, that was ready to go; only a few phrases, the music, and a few ideas. It worked… all three hours were used up and I did it!  I finished the piece and Ben interviewed the dancers at dinner and some in NYC at a later date.  My goal was to document my process as I choreograph and I think we got some great footage. Ben showed me the rough cut and with a few edits, I think we’ll be ready to go soon.  I’ll be posting the announcement of the finished piece in the near future!

In other news, I had a great time in Phoenix… just got back a few weeks ago after being commissioned to set a piece on The Movement Source Dance Company. This was my third time with that company, and I really loved the new dancers. The 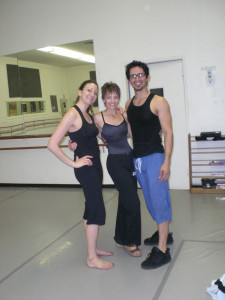 director had me workin’ it, as I also taught a handful of master classes for her dance students at St. Xavier Prep School. It was a long day that day… up at 6a and

out of the studio at 10p, after teaching a master class to the company and then having a 2-hour rehearsal! I missed my connection on the way out in Atlanta, so I lost a day working with the company, but… WHEW!!… managed to set the work in three days… and, on a positive note, I got a brand new T-shirt from staying overnight in Atlanta… also got to see my dear friends from my graduate days at U of A in Tucson.

This past June I was a guest artist at the Tony Calucci’s Dance Extension in Columbus, OH.  My dear friend and colleague, Tony Calucci, runs a class operation.  He owns two studios in Columbus and has his finger on the pulse of the arts in the city.  I taught for a week, all ages, and then set two pieces on the company.  I had two dancers learn, “Undisclosed Recipients, “ and then I set a new piece on eleven dancers called, “Back Life.” I used a really nice piece from the sountrack of Peaceful Warrior. I must say, Tony has a good group of students… very well trained and disciplined. We had a blast at night going to gay bars and even went to the Columbus Gay Mens Chorus one night. That was a trip I’ll never forget.  Columbus is a happening town! 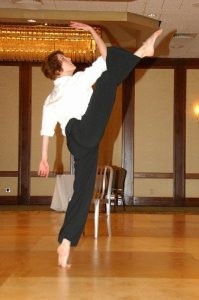 Annie Church premiered “Undisclosed Recipients,” at the West Coast Swing/Hustle/Salsa Fest in Stamford, CT  this past May. I had first danced the piece at my church on Laity Sunday, 2008, but it was in rough form, as there really was no room to dance on the altar. My husband, Don, had heard this song, written by John Legend with narration by MLK, Jr., on TV, during Black History Month.  I loved it and wanted to dance to it. I mapped it out, but set it formally on Annie at this wild event at the Hilton for West Coast Swing and Hustle.  It was a huge event and modern dance was the centerpiece of the evening.  Weird, but they wanted the dancers at the event to get a taste of other styles of dance.  It was a hit!

Before that event, Annie had me as a guest artist at the Tappan Zee Dance Studio where I set a piece on the studio company, entitled, “Main Drag. “ The piece was jazzy, and fun, and the girls did a fantastic job!  They were the highlight of their end of year recital, where they performed for an audience of 300 people in Tarrytown, NY.

Wow, I’m talking up a storm!  A couple weeks before my final rehearsal with Tappan Zee Dance Studio, I had returned from an artist-in-residency gig at Western Kentucky University.  I loved the students there!  They were attentive and hard-working, but I didn’t really like Bowling Green!! I was there for 8 weeks during a really crappy weather season.  I stayed with two Chinese women who were also guest teachers at the U, and they made me homemade Chinese food and taught me words and phrases like, “Ni Hao Ma?” I also taught them some English, so we had a nice time trading our cultures and laughing over stupid things like, keeping the shades level, as per the landlord’s request.  He was a bit anal!  The dancers learned a new piece, entitled, “3 Doors.” I had quite a task making that piece, as it was in 4 sections, but all-in-all, they did a bang-up job.  I had to leave before they performed it, so they sent me the tape just recently.  I was pleasantly surprised. It looked pretty good, but I think the stage was a bit too small for the twelve of them. The costumes turned out better than I thought, which, was very cool.

Oh, and BTW… I’d like to thank two of my dancers, Meredith Fages & Robert Halley, for their beautiful image seen in the photo at the top of my blog page… this photo was taken, by Jack Hartin, at a gig we did at the “Dance Under The Stars” Choreography Festival in California in 2006.

I think I’m done now!  This was a full summer and start of the Fall.  I’m thinking of a new piece called, “Bento Box.” I’ll start on it sometime when the mood strikes me. After the last few weeks, I think I’ll just be hanging for a spell… 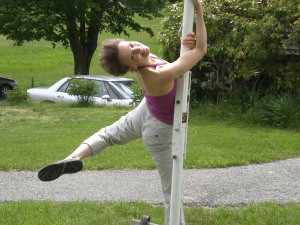