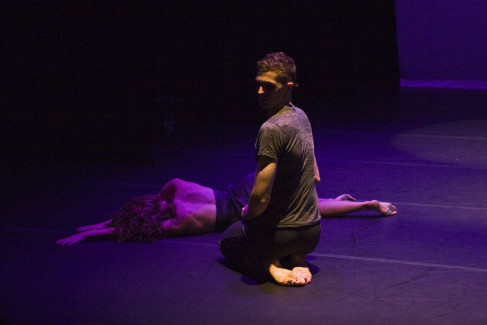 I was recently looking at a vintage video reel of my husband’s ancestry, featuring  a remote Danish village in McCabe,  Montana. I was impressed that someone took the time to set up a screen, run a 16mm film of  rare footage of community life of a rural town and its people, while at the same time videotaping the screen with their digital camera. You could hear the sounds of rat-at-tatting of the old Kodak in the film, as it led you through crop picking, parades, church picnics, and the town’s later desolation. It was a bitter sweet scene to see the town that was once so vital with character, charm, and wealth, left as a mere  shadow of itself.

Watching that old footage prompted me to think about the idea of preservation–“I should make a reel featuring my choreography before it’s too late,”  I thought.  Afterall, some day some archeologist might need my reel to carbon date choreography. The Mayans were wrong, btw. The new cave findings show us here for another 3,000 years at least, so I’m sure you see my point!  So using vintage video, as well as recent work, my editor Amelia Golden and I, knit together Kodak moments of Adams Company Dance. You won’t hear the 16mm ticking of the film on this one, but you might enjoy our Garage Band arrangement we created just for this. I hope it reels you in!  Click here to see our reel.