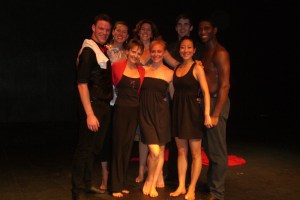 Maslow would be proud of me if he knew that I was highlighting the lowest level of his pyramid in a dance! If we didn’t have the handicap of always focusing on how to afford food and shelter, just think how much more we could do for the world. In this dance I used an umbrella and a large, red cloth to depict money, power and greed. Annie had a silver, sequined pair of honkin’ high heels that I had to use (oh no, I think I have a shoe fetish)! A pair of gold lamé gloves found their way into my dance bag, so she wore those, too. Hmm… silver and gold!

This event at the Secret Theater in Queens happened on July 10th from 6:30-9:30 pm. I had 3 hours to make a 9 minute 28 second piece. It happened in 2 hours and 9 minutes when it was all said and done, however. My inspiration was this picture that hangs on my office wall of people running for shelter under an umbrella.

Nicole Renaud, an amazing French composer/accordian player was so gracious to allow me to use her music, and in fact, was delighted to have me choreograph to her work. 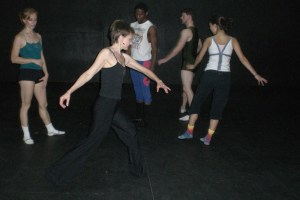 I must have been in labor because I only had a few phrases to show the dancers, and the rest  just came with a few pushes. We ran the piece twice at the end with videographer, Marie Le Claire  raring to go. Also, young film maker Amelia Golden, was present the whole time with the task of making a new film of the experience. With all lenses in focus, the the dancers sweat like there was no tomorrow and a new piece was born!

I was thrilled to have the opportunity to do this, which also served as a farewell, but not goodbye to Ryan Schmidt and Julie Fiorenza–both who will be moving out of NYC at the end of the summer.  So sad to see them leave, but life is calling them to new pastures.

After a fun corner-diner experience with the group, I had time to think about the upper levels of the pyramid on my commute back home:  morality, creativity, spontaneity, problem solving, lack of prejudice, and acceptance of facts–seems I attained that level in a quick 2 hours and 9 minutes–enough time to make me forget that rent was due! 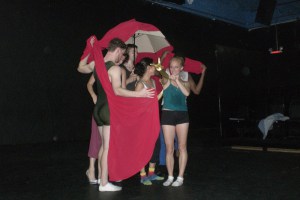