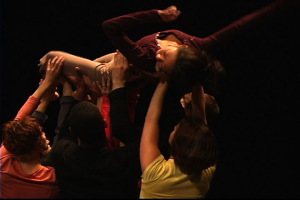 I support local farmers and film festivals!!! There is a best kept secret called the Mystic Independent Theater in the bucolic little town of Mystic on the Stonington side of the river. They are really cool folks who have a passion for the arts, artists, and film culture. Their film festival will screen Ben Moss’s and my documentary, “Except At Night: The Making Of A Dance,” next Sunday, December 12th.  Read the below paragraph for more details!

This short documentary reveals my process; whereby, I assigned myself the challenging task of choreographing a 10-minute dance in 3 hours time. Using eight dancers, this film highlights the craft of choreography and the process behind its creation.  It’s a first of its kind film, and it is my hope, that  I will be able to allocate its use for educational purposes. The documentary was shot at the Massey Theater at Greenwich Academy in Greenwich, CT by Benjamin Moss, Master’s candidate in the Film Program at Hunter College, NYC. “Except At Night: The Making Of A Dance” was first screened at Ailey Citigroup Theater, NYC, in 2009.

Locally grown and ready to be sown, this documentary is for all to enjoy! Hope to see you there!